I always liked fables for their simplicity to express complexity. Knitting from different standpoints, different media and different expressions as if they were strands of sting. Fable like metaphors in different languages.

In this work, I reflect on our compulsive tendency of materializing fleeting thoughts and moments. We are obsessed with recording our lives in the form of tangible inanimate objects, because of our strange phobia of death. Mortality is still one of the greatest sources of human fears. There is a natural desire in us to overcome death and oblivion, tied to the need to pass on our memories. This desire for immortality can be seen both in the individual dimension, as a fear to forget and to be forgotten — in reality or even a transferred one — which leads to the necessity of creating memorials, taking pictures, writing autobiographies, posting even the most insignificant accomplishment on social media or storing everything in digital memories.

Scarce are the plants in my land. The meager soil of an eroded plain. Feeble the fruit that is born. Stingy the veins of the crops. Identity: built upon the pillars of reminiscence.

What a nice winter we have so far I have been able to recollect so many leafs. I was in constant fear that the snow would come and erase their existence. A few times the snow came, hitting without hesitation. Normally they rustle and rot. Come close to the soil. Become black and then are covered in white. Didn´t happen this time.

When the fear of humanity dying out as such is added to preexistent fear of self-mortality, well we have a very nice mixture of worries to add to our daily lives. Pointless memorials, pointless drawings pointless floppy discs that no computer can read. Sad that to preserve my collection of leaves I cover their golden hue in a white acrylic resin. The color of the snow that would have wiped their structures in the first place, had it come.

Leaves and seashells have a very interesting architecture. Funny is that trees do not worry about the ephemeral nature of their leafs for they live so long and in contrast the sea slug takes pride in his craft for his home can last for centuries before turning into grains of sand. 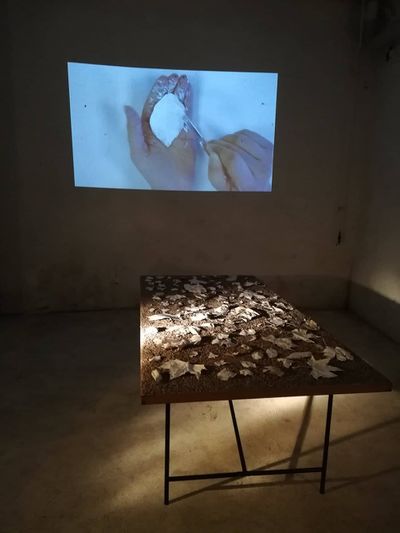 How the project developed

In its basis simple. I gathered leaves. I painted leaves. Otherwise, time consuming.

To fully block the original hues in the leaves I applied multiple layers of paint. The tones used scaled among whites. Not really shades, but actual tones. First layers on leaves with very cold natural hues where done with titanium buff. I discovered the color differs extremely from one retailer to another, but it is like a cream tone. For very dark leaves the first layer where usually done with regular titanium white. All titanium colors have the advantage of really blocking undertones from shining through. Then of course Ivory white was used, also pearl white and a not so pigmented titanium based mixing white. Some leaves have only four layers of paint, and some have up to ten. The more textures the leaf has, the harder it was to paint over the leaf without covering the structure of its veins.

Then came photographs and videos that documented the fact that I was hoarding leaves. Then the documentation itself started to hoard over my computers memory. Special thanks to Alejandro Diaz and Catalina Chaparro for having the patience of walking in the cold, scavenging for leaves and helping me film in the park. In some occasions even with a ridiculous Go pro camera strapped to my head. Parks are very beautiful glimpses of tailored nature, make cities a little more bearable, and a wonderful place to get leaves. Among my collection I now have gingko leaves something you just don´t get in a German forest.

In the following link more images and video presented. More on the process

The Mushroom at the End of the World. Ana Tsing

Article:Painting Beside Itself. David Joselit

During the semester, I encountered a lot of anxiety regarding many subjects within my work. I come from a different background in the arts, painting. For a longer time I have been questioning how this from of the arts is interconnected with other social and cultural occurrences rather than from the comfortable standpoint of an object. Then again, the fetish for manual labor and for the “physical”, or embodied matter, which you transform and move. I would compare it to leaving a print on a material, is something not only I but also many need. Let´s say a sensorial need. Then again the question on how political or environmentally engaged can the medium of painting be. Naïve to believe the medium does not matter and that one can express any thought or emotion within it without taking in account the diachronic nature of the medium. Even within language a synonym does not necessarily retain the meaning once switched in a sentence. I found refuge in the simplest of pleasures, fables. As well, I found pleasure in the simplest of structures, haikus. I wish to experiment with the painterly nature of words. Parallel to that I would like to find a way to work with the symbols within quotidian objects and the meaning behind a medium. Someday I might get the hang of it.