Difference between revisions of "Cosmo Schueppel"

Awareness and movement in the phonetic garden (working tile)

As a participatory sound installation the piece aims to guide the participator inwards into the awareness of their movement - at the same time as it guides the awareness back outwards into a connection with the surroundings. Phonetic garden (title shortened) opens the topic of humans relation to the world around them. In the human centred thinking of the Anthropocene, the fact that our behaviour has an effect on our surrounding - as blatantly obvious it is - is often overlooked. This lack of awareness about the consequences of our action - effecting all living beings, nature and other humans - is in my opinion the source of most of the suffering of our time. The work tries to shed light on this topic, taking a small step into a more empathetic future.

When the visitor enters the space they can observe a dimly lit room with plants spread around. Through the air vibrate fluctuations of soft sine-wave frequencies. As the visitor walks around and gets closer to the plants, they can realise that their movement changes the sounds that are created around them. In this setup they can discover how it feels to hear your own movement and to hear that your presence and behaviour changes the atmosphere around you. What the movement changes is quite simple: It is the electromagnetic field of the room (more to that further down). Why and how it is changing is purposely not communicated coherently is the work. Instead it takes a speculative approach that stresses the fact that there is change. By leaving the Why open the work aims to start a process of discovering and questioning in the participators. By leaving the Why up to everyones own speculation the intuitive discovery of How is encouraged. Again the direction of the focus of discovering is guided inwards and outwards. Outwards into the relations with plants and sound. And inwards into the sensations that occur when ones own movement is clearly observed.

This interface for inner and outer discovery is accomplished, as briefly mentioned, by measuring the natural electromagnetic fields that are omnipresent in every space - using the plants as ‘antennas’. According to my experiments (I am of course not claiming this as a discovery, but I am not aware of studies that go deep into this topic) when measuring EMFs (electromagnetic fields), there is always a rhythm noticeable. Depending on the sample-rate (the number of measurements per second) this rhythm is depicted differently - similar to the relation of sampling rate and sound waves. When EMFs are measuring in a rate of 100 or 200 (milliseconds delay after every sample), a fluctuation can be observed. The strength of that fluctuation seems to depend on the strength of the EMF. Main influences are electronic devices - especially power adapter, them being less shielded - but also human movement. Movement, or presents seems to not heighten the EMF in a noteworthy manner. Instead it only seems to disturb the observed pattern or fluctuation.

I started my research by measuring electric resistance in plants. Here similar fluctuations could be observed. I was under the impression, that this was a kind of pulse of the plant itself, but I came to the conclusion, that the plants were probably picking up the EMFs from around them. Although when comparing plants to regular antennas, when measuring EMFs directly, the plant is less sensitive to movement around them, and keeps the fluctuation more strongly. To me this suggests, that the plant seems to bring their own impulses into the measurement. On the other hand this could also mean, that the plant is just not as sensitive as wire, due to it being less conductive. More experiments have to be done, to get closer to a more scientific conclusion.

At this point I would like to mention that I cannot claim to work in a scientific fashion. I am trying to give my best, but due to my recourses my focus cannot be scientifically backed results. Because of that I am sticking to finding reaction and patterns. These might not give clear answers, but help myself discovering the world and finding means to express my myself.

The data measured with an Arduino, is sonified in Max MSP and then processed and stylistically adapted in Max for Live. The now created soundscape can now be played back on speakers in the space of the installation. In my opinion it is important that every plant has their own distinct speaker, so the participator can clearly understand how their movement is picked up differently form every plant. This puts me into some difficulties with using a computer with a stereo output. There are three solutions for me at this point. One would be using a second, or even third computer in the final setup. Another would be finding a way to create the sound more or less ‘analog’, what I mean is only with an Arduino and not rerouting the signal through Max. And lastly I could stick to only two plants in the space. 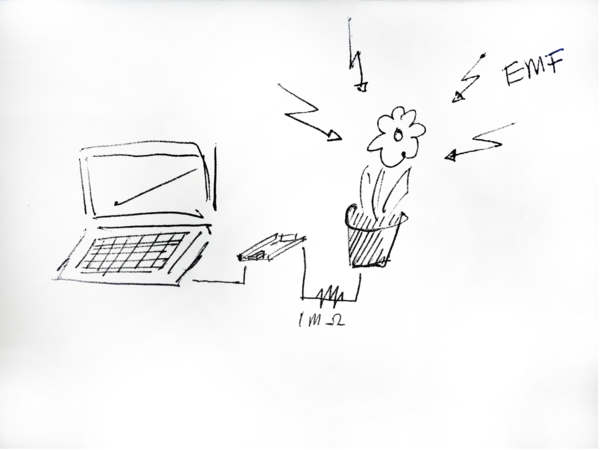 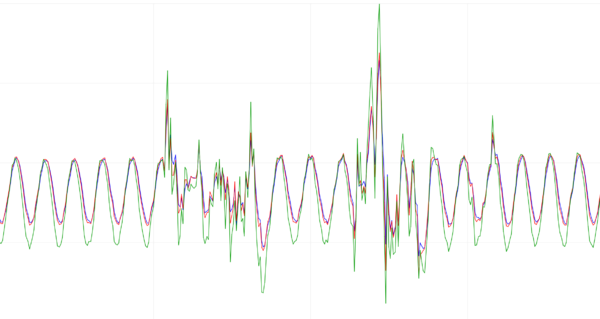 Max Patch use to create sound 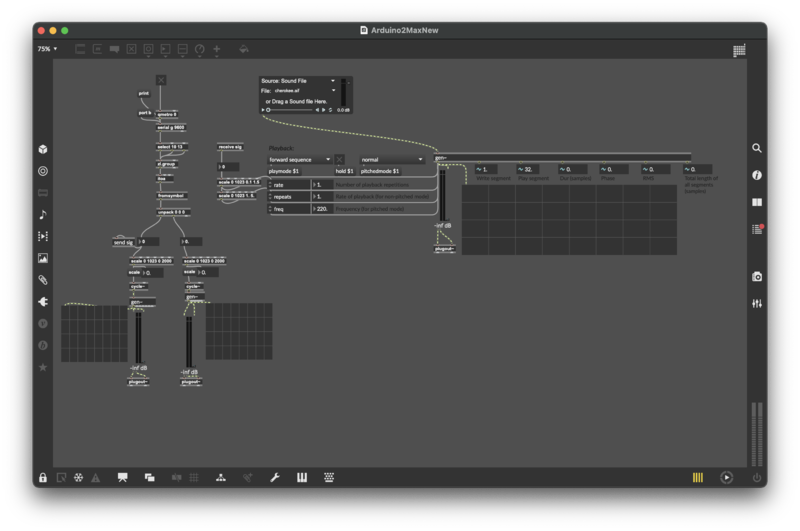